3D modelling made it possible to visualise the tight space conditions very well and to plan the piping connections efficiently. All necessary functional parts were accommodated in a space-saving manner. This challenge was optimally solved thanks to 3D modelling.

Key data on the project

Wismar Pellets GmbH focuses on the production and trade of wood pellets. Its aim is to ensure the provision of its products to all markets in the best quality. 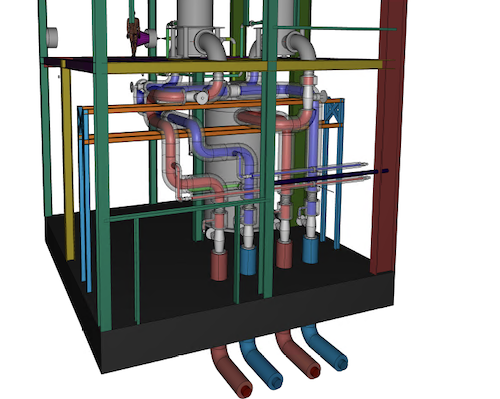 Thanks to 3D modelling, the tight space conditions could be visualised very well and the piping connections planned efficiently.

District heat is to be extracted from a new turbine hall. For heat extraction, steam is taken from a steam turbine and fed into the heating network with the help of two heating condensers (Heikos). There was a fixed position for the two Heikos in the turbine hall, just as there was for the newly planned district heating pipes, which initially run underground and enter the turbine house vertically through the floor slab. The task was to connect the district heating pipes with the Heikos and to accommodate all the necessary functional parts in a space-saving way.

The task of eta Energieberatung in this project was to plan the piping in a 3D model. This allowed the tight space conditions to be visualised very well and the piping connections to be planned efficiently, with all necessary functional parts, such as shut-off valves, pressure and temperature sensors, compensators, branches to the building heating and drainage as well as flow meters with the necessary inlet and outlet straights, to be accommodated in a space-saving manner. This challenge was optimally solved thanks to 3D modelling.

Thanks to the foresighted planning, it was also possible to create a concept for storing the pipes on a steel girder framework. In order to absorb thermal expansions, corresponding bends and compensators were planned.

We help you realise your concepts

We will be happy to advise you on the solution of your questions regarding the planning or optimisation of local/district heating networks and customer acquisition.

You can also make use of our versatile CAD skills here.

We will find a customised solution for you.